ETA: When I posted this and set a deadline for the giveaway, I forgot I had a funeral Friday, and that pretty much ate up my day. I did (randomly) pick two winners in the end, just a bit later than I’d planned. So, Claire and browncountrygirl, look for an email from me soon (or you can email me at anne @ annetenino.com).

Thanks for all the lovely comments, everyone! I’m definitely getting better already.

It’s been a very long time since I wrote a real blog post. Not just a notice of what I’m up to, or that I’m not the one who wrote that book that has my name on it.

It’s probably going to be a little longer though, because this post is really just about what’s up with me. I do have a few posts I’d like to get up about writing in general, but it seems as if I should probably be writing regularly again before I go slathering my wisdom all over the world. 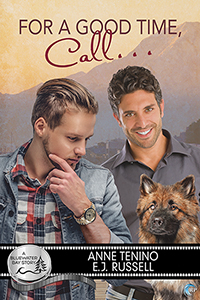 First item of note—I finally got a book out after two years of not really writing or producing anything. For a Good Time, Call is a Bluewater Bay novel and I wrote it with a partner, my friend E.J. Russell. Honestly, if not for her I might not have finished the book.

For more info about the book, check out my Bluewater Bay page.

I said above I didn’t write or produce much in the last two years, but I did have a number of my Riptide books made into audiobooks. Wedding Favors is the most recent release, and it came out within a month of the release of For a Good Time, Call. Nick J. Russo is the narrator, and he does a fantastic job.  To buy the audiobook, go here. 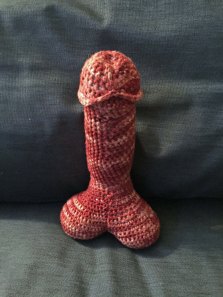 Very soon (like, next week, from May 2nd to 7th), I’ll be heading to the 2017 RT Booklovers Convention in Atlanta. I didn’t register in time to get into the book signing (although I think I’m EJ Russell’s official assistant there), but you can find me either at the Riptide Cards Against Humanity game, Thursday May 4th beginning at 2:45. You of course need to register for the convention to attend, but if you do, I’ll have an extra special prize for at least two people. Yes, that’s right, a crocheted penis. I’d planned to make at least two, but the funny thing is that once I got started I realized I had a lot of unfinished penii around, and so I started finishing them to bring. I’m not going to promise there will be three for winners at Cards Against Humanity, but it seems more likely than not at this point (and there could even be four . . .).

Also, for anyone interested, I’ve said I’ll arrange a few informal times and places for the LGBTQ romance crowd to meet up during RT, if they’re interested. Once I’ve figured that out (next on the list), I’ll post it on Facebook and here.

My Lyme disease is back. I’m officially in relapse, but I’ve been taking antibiotics for about a week now and I can definitely tell they’re working. It’s nothing like the first time around, although I’m still a little more tired than usual, and I’ve decided my superpower is forgetting things. The doctor says I’ll be in treatment for six months, at the outside.

Except for anyone who reads all the way to the bottom, I think I’ll do a giveaway. Leave a comment here before midnight, Friday, April 28th (that’s Pacific Daylight Time, FYI) and I’ll pick two winners who can have their choice of a For a Good Time, Call ebook, or the Wedding Favors audiobook.

Pride and Pleasure Facebook Group »
« That’s Not My Book