A few months ago, I wrote a very short epilogue for Frat Boy and Toppy, then when I started writing Love, Hypothetically, the epilogue acted as a bit of prequel for Paul and Trevor’s story.

The key words, though are “very short.” I meant to write more, but it never really came, and I’ve sort of moved on… sorry. I have no excuses (well, I did, but after writing them out in this post I deleted them all, hence the not having any). But… I hope you enjoy it?

(Details about swag after the epilogue).

Sebastian enjoyed finally settling into his new life with Brad. They’d lived together a month before Sebastian had been forced to leave for his summer term archaeology class in Turkey, and Toby had been in the apartment the entire time. Sebastian had been relieved to find Toby had found another place to live when he got home from the dig three days ago.

It was just them, now. Him and Brad. He marveled at how that idea engendered no panic, but only a sense of buoyant warmth. Lazing around on a sunny summer morning, drinking coffee at the table and watching Brad’s ass in nothing but briefs while he cooked pancakes? It was perfect.

Until the phone rang.

It could only be one person at a time like this. Best to ignore the damn thing.

Brad didn’t share—or was unaware of—this philosophy. He smiled over his shoulder at Sebastian, simultaneously flipping a pancake, reaching for the phone and saying to Sebastian, “I’ll get it babe.”

The casually thrown out “babe” stunned Sebastian into mute immobility. He blinked at the dust motes floating in front of his face. Laid low by a pet name. Too stunned to say, “No! Don’t answer it, it’s—“

Sebastian scratched designs on his napkin with a fork, watched Brad’s ass and listened to his sister squeak and chirp. The ass-watching just wasn’t quite as fun this way. Her incessant yodeling ruined the mood. Not that he stopped.

He’d almost managed to forget about his sister until Brad said (mid-chirrup) “No,” in a firm voice.

The warbling stopped momentarily, then began again with more vigor.

“Sophie, I’m telling you—no. The guy’s using you. Are you putting ou—shit, don’t answer that. Just trust me, love is no part of the equation.”

Frantic squeaking noises erupted from the phone. Brad interrupted it. “I know womanizing assholes, I’m a freaking expert. I spent two years living with a couple dozen of them. I spent seven years trying to be one. I’m telling you, any guy who says, ‘I could see this really going someplace’ on the second date is one. He’s talking about going to get a room, not moving in with you.” 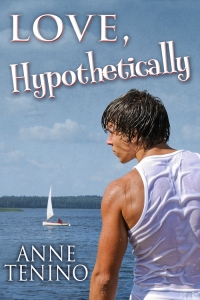 The absence of Sophie was deafening. Sebastian sat up straight, his ears perking. He heard Brad flip a pancake, but otherwise it was silent.

“Yeah, I think you should tell him to fuck off,” Brad said, bending to put a pancake on the plate in the oven.  It did delicious things for his briefs.

“Fine. Gimme his number and I’ll tell him to fuck off.”

Brad shrugged, first grabbing the phone to avoid losing it. “Your choice. You do it or I do it.”

How the hell was he going to enforce that? Sophie would see right through the tactic. Brad turned, warm plate from the oven in hand, and smiled in a very satisfied, smug way at Sebastian. “I think it’s for the best,” he said kindly into the phone.

No. Fucking. Way. He stared at his boyfriend. The man who was bringing him homemade, piping hot pancakes, wearing nothing but briefs, gilded by sunlight and afterglow. The man who’d vanquished his sister. Was it any wonder he loved this frat boy?

Even if he felt a teeny, tiny bit resentful. Sophie sure the hell never listened to him when he told her to dump a guy. Brad raised a superior eyebrow at him, as if he knew what Sebastian was thinking. More of Sebastian’s admiration jumped ship, joining him in the broad sea of annoyance.

Then Brad stopped, mid-kitchen, and the smug expression melted off his lips. Renewed trilling from the phone leaked out. “No,” Brad said, but he sounded more panicky than firm. “Dude, I can’t—“

An insistent peeping cut him off. Sebastian stood up, reaching for the plate with one hand and Brad with the other. He led Brad to the table, audibly assaulted by pleading chirps.

Sebastian had been there. He could empathize.

He assisted his dumbstruck boyfriend into a seat and went to get the syrup from the pan it had been warming in.

“Sophie,” Brad broke through the wall of shrills. “I can’t. I’ll be the guy who went gay and then started trying to set up my frat brothers with—“

“It doesn’t matter that you’re a girl, you’re my boyfriend’s sister.”

“No, you don’t understand.” Brad sounded increasingly frantic. Sebastian set syrup and butter in front of him. He didn’t notice. “They won’t want to go out with you.”

“Because it’s the next thing to going out with my sister. You’d be the opposite of a sure thing. You’re the girl they can’t touch even if you’re giving them a Texas lap dance, because I’ll pound their asses if they do.”

Warble. The teasing tone—a sign the situation was calming down, back to threat level yellow. Brad’s jaw dropped open in affront. “No one thinks I can’t kick their ass because I’m gay!”

Oh no, she was playing him like a fiddle. Sebastian froze as a firm squawk reached his ears. Fuck, how had they gone from threat level yellow to threat level red so fast?

“What do you mean, you’re coming to visit?”

Threat level purple! Close the borders! Alert the National Guard! Sebastian dropped into his chair on nerveless legs. Brad’s panicked eyes sought his as he said, “I really don’t think Sebastian and I want to host a party and invite all my frat broth—“

The I-don’t-care-what-you-think-you-want voice. It was all over.

Warble. Then a dial tone. 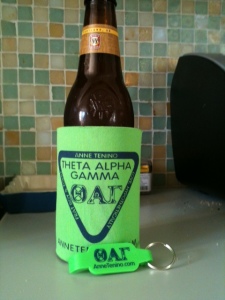 A little while ago LC Chase made me this very cool TAG fraternity logo, and I thought to myself, “Well, what would a frat boy do?”

You guessed it, I ordered beer cozies and bottle openers with the logo on them. 😉 The Calapooya College colors are lime green and navy blue, so the swag is, too. Okay, actually it’s neon green, since lime doesn’t seem to be a viable option for swag items. At any rate, I’m taking it to GayRomLit, of course, but if there’s anyone out there who isn’t going to GRL but wants some TAG Swag (heh, rhymes), email your address to me at anneATanneteninoDOTcom and I’ll send you a cooler and a bottle opener.

I’m assuming not that many people will want them, but if, say, fifty people email me, I’ll have to cut y’all off so I actually have some for GRL. And if you’re going to GRL (or Wordstock in Portland, Oregon, wh

ere I’ll be the weekend before) please ask me there for your swag.

As well as the TAG Swag (seriously, can’t get over that rhyming thing), I got some screen-cleaning cloths with my avatar—another thing I’ll have at GRL and Wordstock, and if you’re interested in one, I’m happy to mail those out, too.

15 thoughts on “Frat Boy & Toppy Epilogue (and some swag)”