I’m waiting (im)patiently for my free story, Whitetail Rock to be posted by the Goodreads M/M Romance group’s for the Hot Summer Days event. Whitetail is about 26,600 words long (my version of a “short” story), and I wrote it in response to a picture prompt. You can check out the picture here.

Here, while we wait, is…

Nikhil “Nik” Larson is a snarky, dark-skinned adoptee from India who grew up in the Whitest Town in America. Back to visit his parents Nik meets Trooper Jurgen Dammerung, a blond, butch motorcycle cop who’s so hot he leaves a con trail wherever he goes.

Jurgen is the epitome of everything Nik hated about growing up the lone Indian boy among a town of white people. But Jurgen surprises him rather (ahem) pleasantly, in spite of — or because of — Nik’s attempts to needle him. By the end of his visit, Nik realizes he likes Jurgen. But Jurgen’s so not the relationship type.

I made a lovely cover (if I do say so myself) to go with this lovely story. Since this is my blog, I get to post the cover and take full credit and accept adulation. 🙂 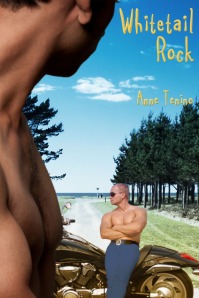 The cover I designed for "Whitetail Rock"

Here, to wet your whistle (whet your appetite?), is a little sample of what I wrote. This is the beginning of Chapter Three:

As soon as Nik turned the corner, he heard boots crunching across the gravel. He didn’t sound like he was hurrying, but somehow Jurgen was on the porch before Nik rounded the back of the building. By the time he had his hand on the screen door handle, Jurgen’s hand was holding it shut.

What? Nik was frozen, hand gripping the screen door. “What?” He found himself looking at Jurgen’s hand, planted, finger’s splayed, next to his head. He had a light dusting of blond hair on his knuckles. Nik could feel the heat from Jurgen’s forearm on his ear.

When had the porch light come on?

“You think you’re some kind of what? Trophy fuck?”

Nik closed his eyes. He wasn’t having this conversation. Especially not with the Blond God of Gay Police Officers.

Yet again, his mouth betrayed him. “Are you saying I’m not?”

Nik opened his eyes and yanked on the handle. Not surprisingly, the screen door didn’t budge.

“What made you think that?”

Nik closed his eyes again, and slowly let his head sink against the door. Then he beat his forehead against it a couple of times, the screen giving under his head. In terms of distracting himself with pain, it was pretty ineffective.

“I was a point of some curiosity here in this little hick town,” Nik finally said.

Jurgen’s voice was a little slow in coming. “So, some bi-curious hick — white — boy came along one night and what? Lured you into his truck and then fucked you?”

Nik snorted. “C’mon, give me some credit. I blew him.” His voice sounded weird, smashed up against the screen like that.

“And he said that? He liked how your dark lips looked on his dick?”

Trooper Straight Talk didn’t like to mince words, did he? Nik shrugged, head still on the screen. He was probably getting a grid pattern smashed into his head. “Something like that.”

More than one what? Oh. Guy. “I only fell for it once, but yes, more than one guy came around here looking for some while I was in high school.”

“Did they all say that? It was because you weren’t white?”

“What is this, a police investigation? No, they had more brains than to admit it upfront.”

Jurgen was silent a while, and they stood there. Nik’s head still resting on the screen door, Jurgen tensed behind him.

Jurgen’s voice startled him. “How did they even know you were gay?”

“C’mon, Trooper, you must have a pretty good idea by now that my reaction to feeling insecure is to get loud and proud.” Nik didn’t have the energy to put any snark in his voice.

“You don’t think it was just because you were the only openly gay guy around? You weren’t the only dark skinned guy around. Half the county’s hispanic.”

That’s not the same thing. Nik just bit back his knee-jerk response. “How many of them are openly gay? Besides, they have a whole community. I’m one Indian boy raised among white people.”

Jurgen sighed. It was a weird sound, coming from him, hinting at actual emotion. Emotion other than lust.

Was lust an emotion?

“I wasn’t thinking of you as a trophy fuck.”

Jurgen stepped in closer behind him. Nik began to regret not moving away from the door. If he did it now, it would be a clear retreat. He lifted his head from the screen and pressed his palms against it.

“I’m not going to lie to you, the idea of seeing your skin against mine makes me hot.”

Nik stiffened even more. Running away was looking increasingly appealing.

“It’s part of the package, Nik. I’d want you if you were white, too. The fact that you aren’t is just an added dimension. Thing is, I think you’d like it, too.”

Nik could feel the heat of Jurgen’s chest against his back. Jurgen’s other hand came to rest on the other side of the screen door.

Running away wasn’t really an option anymore. He was trapped. Which should be alarming and frightening, but… wasn’t. His heart was pounding, but it had more to do with how arousing it was to have Jurgen crowding in behind him, not quite touching, but letting Nik know he was there. That he’d blocked off escape.

When Jurgen spoke, his lips tickled Nik’s spine, making him jump. “I think you should see it.”

“See what?” Nik sounded like he hadn’t had water in a month.

“What it looks like when I wrap my hand around your cock. I won’t even watch. We can stay just like this.” Jurgen’s lips were a little bit chapped, and the rough touch of them traced up and across Nik’s neck, to just below his ear.

“You can have it all to yourself. You can see my hand wrap around your dark skin. Dark and light. I bet you’re that purple-brown color, aren’t you? And when the blood’s filling your dick and your heart is pounding in your ear drums because you’re about to blow, the head of your cock gets dark purple, and shiny-smooth. Right then, Nik, you’ll look and you’ll see my thumb sweep across the head. I’ll look so pale next to you. It’ll be some white man, jerking you, and he won’t even get the pleasure of seeing it. All for you.”

Ugh. Cotton-mouth. Nik swallowed a couple of times. “Please.” Giving Jurgen exactly what he wanted, but it was really for Nik, right, so it was okay. He pushed back against Jurgen, rubbing his ass into Jurgen’s hard cock, unable to help himself. He needed what Jurgen was offering.